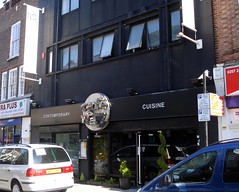 Cafe Naz was a Bangladeshi restaurant on Brick Lane. It has now closed.

In July 2013, Cafe Naz announced that they were closed for "major refurbishment works" but would be opening again after a couple of months. However, as of September 2013, half of the building had been taken over by an estate agent called Crestons photo, and building work was going on in the other half. According to Google Street View, as of May 2015 said other half had become a restaurant called Sweet & Spicy.

The food is good, with a fairly decent range, which includes all the standards but also a few less common dishes.

Various comments on the interweb suggest that the service is not very good when they're busy. DrHyde's experience on a very quiet Thursday night is that it's not particularly good even when they're not busy. One of our party's drinks didn't appear until the staff were reminded, the wrong rice came with the main course, and the complimentary ice-cream also never showed up. Even so, the food is good enough and the service friendly enough that I'd forgive them that and go again. It's certainly better than almost everywhere else on Brick Lane these days.

James went here for a work christmas dinner (of all the places...). The food was mostly good, though i found my lamb achari to be quite unpleasant. Having tried a little of everyone else's however, I suspect this was just a bad dish and wouldn't hold it against them.

Delivers within a 2 mile radius.