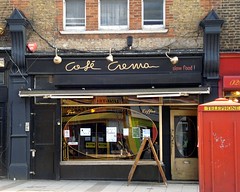 Now closed; was a vegetarian and vegan cafe/restaurant in New Cross. The premises were sold to a new owner in early 2015, and Cafe Crema itself closed in April the same year.

Bec visited late on a Saturday afternoon in October 2008. Weekdays it is usually packed with local Goldsmiths students, today it was busy but there were a few free tables and the atmosphere was more relaxed.

A basic white coffee and a chocolate brownie came to £2.40. The coffee was fine, the brownie a bit dry and tasted as though it was made from a Betty Crocker mix, but served as a perfectly cromulent sweet and cheap snack. (The owners tell us that all the cakes are made on the premises from scratch, so perhaps their baker just had an off day.)

Standard coffees, teas, and hot chocolate are served, along with some juices. The cafe is licensed and sells beer and wine. All food and drink is available to take out, with mains costing £4-£6, and smaller lunch standards such as toasties and soups from £2-4. All the food is vegetarian or vegan. The vegetables are sourced from an organic farm in Lincolnshire. (Prices as of December 2008.)

They also serve a mix and match all day breakfast, however like most cafes in the locale, it is closed on Sundays. They will only accept payment in cash.

Film nights are held every Thursday (unless it's "a holiday") and cost £2 as of March 2011 (the bar and kitchen are open for refreshments during this). Films shown in October 2008 were Delicatessen and Betty Blue.

As of December 2008 they also hold once a month 'piano jams' starting at 8pm with a sign encouraging people to bring their banjos, ukuleles, guitars, fiddles and tambourines. Live music is hosted during the week with upcoming details on the corkboard and in fliers on the front window.