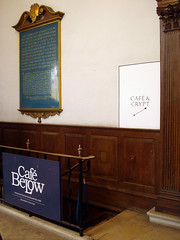 Cafe/restaurant in the crypt of St Mary Le Bow church on Cheapside in the City.

It used to be called The Place Below photo, and was totally vegetarian for the first two decades of its life, but in autumn 2009 it started serving meat and fish dishes as well, and relaunched as the Cafe Below. It's still vegetarian friendly; about half of the lunch options are usually vegetarian, though there's less choice in the evenings. The (fairly substantial) salads are usually the only vegan option.

As befits its location beneath a church, the seating area is quite atmospheric, with stone-flagged floor and arched ceiling. Stone pillars break up the space and offer extra privacy. The tables are a mix of small ones for 2-4 diners and larger communal ones.

Kake visited on a Monday lunchtime in December 2014. It was quite full at 12:45pm, but I didn't have to wait for a seat. No music was playing, but there was plenty of conversational background sound.

I went for the four salads of the day with hummous and olives (£8.75) photo. The dressings were light, and enhanced rather than masked the flavour of the ingredients. The four different salads — one based on giant couscous, another on puy lentils and brown rice, another on beetroot, and another on carrots — all had distinct flavours and textures. The hummous was light and flavourful and the olives added a good salty contrast. Overall, it was a nicely filling but non-stodgy lunch.

Service was efficient without being abrupt. My salads arrived very quickly, as did my requested tap water — in a generously-sized carafe, not just a small glass. A 12.5% service charge was added to the bill.

Kake's verdict: I'd come back if I was looking for lunch in the City.

Accessibility: Many mandatory steps to get in, as it's in a basement with no lift.