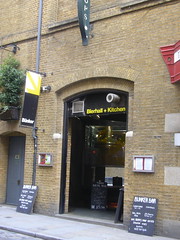 Now closed; was a German-themed bar in a basement near Covent Garden piazza. As of September 2009, the premises are being gutted and there's no indication of what will appear there next.

German-themed bar in a basement near Covent Garden piazza.

Three lagers (one is "technically an ale") are brewed in the on-site microbrewery, and very tasty they are too (£3.10-3.30/pint). A few cocktails are also available, though nothing out of the ordinary.

Note: as of August 2009, a comment on Stonch's beer blog says that the Bunker is no longer brewing, though this may be a temporary state of affairs.

Food is served, with a strong theme of German sausages, although there are non-sausage and vegetarian options too. Quality and prices are both above-average. The menu is divided into:

Note: the menu these choices were taken from was labelled "Today's Food", so it seems as though it's rotated at least somewhat.

There is some booth-esque seating, and some bench/table seating. Tables can be booked, and indeed often are, so you may have trouble getting a seat. Food and drinks are ordered at the bar, rather than at the table.

Can get very noisy, to the point where conversation is difficult. Lighting is dim. It is very definitely a bar rather than a pub.

DJs at the weekend. Sport is shown on large screens.