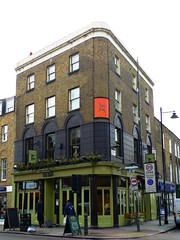 There's plenty of seating here, stretching back to some darker nether regions on the ground floor, as well as upstairs, which is reached via a very steep spiral staircase — don't sit upstairs if you will be drinking a lot. The atmosphere on Ewan's Sunday lunchtime visit in April 2008 was fine, though, not too noisy and with a few spare tables (though it's popular by virtue of its location).

They have ale on tap though nothing particularly interesting; in April 2008 they just had Greene King IPA and Adnams Broadside (£2.90). The lager range was far better — Franziskaner Weissbier (£1.85/half), Kirin, Staropramen, Leffe and other usual suspects — and they had a couple of ciders on draught as well (Addlestones and Aspall).

As of April 2008, food is served noon-10pm Monday to Friday, 11am-10pm Saturday, and noon-9:30pm Sunday, and is cooked in an open kitchen in the corner of the upstairs room. The Sunday roast is £8.90; in April 2008, Ewan took the vegetarian option of brie & mushroom wellington photo. The wellington itself was puffy and tasty, and the accompanying vegetables and Yorkshire pudding were all fine, though doused in far too much gravy. There were no major complaints from my dining companions, but the general consensus was that the food is solid but uninspiring.

The upstairs can be booked for functions, and a sign in the pub indicates that booking is free.