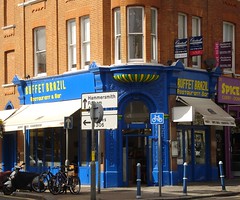 Buffet Brazil was a Brazilian restaurant in Putney, just south of Putney Bridge. It closed some time in the second half of 2010. As of November 2010, the site was occupied by another Brazilian restaurant and wine bar called Point Brazil, though according to Pubs Galore that has now closed in its turn.

Buffet Brazil used to have another branch in Earlsfield, at 505 Garratt Lane, SW18 4SW. We're not sure if that one has closed too.

The decor is fairly basic and cafe-style, and they'd probably be pushed to seat more than about 35 people. The food is good though. They offer an all-you-can-eat self service buffet at lunchtime and an all-you-can-eat freshly grilled meat selection (rodizio, £16.95/head as of July 2010) in the evening. The way the rodizio works is you help yourself from the ample hot and cold vegetable/salad stations, then return to your table and the grill chef brings freshly grilled meat around on a skewer and slices it to order at your table. Dessert is included in the rodizio price; a choice of grilled pineapple or grilled banana. The menu also includes the option of "vegetarian or buffet", which we suspect might be the same as the rodizio but without the meat, so just the hot/cold veg buffets.

Kake and other RGLers first visited on a Thursday evening in January 2008. We had no trouble getting a table as there was only one other group there (half a dozen young men who'd also come for the infinite meat buffet). We all went for the rodizio and also had a few jugs of caipirinha (£13/jug). ilmari noted that the caipirinha was done properly, with no sour mix.

We like our meat rare, and once our chef realised this he started carving us rarer bits. Some of the meat was a bit salty, but there was plenty of it, and it was good quality. I remember we had chicken (both bacon-wrapped and nude), sausages, chicken hearts, lamb, and three kinds of beef — "beef steak" in cubes (possibly flank), rump, and sirloin. The veg/salad stations were also fairly good. Most of the cold selection involved quite a lot of mayonnaise, but they also had a great mixed bean salad and a fresh-tasting finely-chopped pepper salsa photo. The hot "vegetable" selections included a chicken dish, for some reason.

James was less impressed on a June 2008 visit. I twice complained about the saltiness of the meat (I like salty food but I was really struggling to taste the meat through the salt) and then I was brought raw, not rare (I like rare, I don't like raw) meat. This is a great pity as I've eaten there a number of times and thoroughly enjoyed it. I won't be going back. The sangria is the best I've had in London, however.

bob, Martin, Northern Steve and Hannah visited again in June 2009. We were sad to see they no longer had the Sagres Black we'd enjoyed on our previous visit, though they did have ordinary Sagres and Super Bock (£3 each). We had the rodizio again (£15/head). The chicken hearts were quite edible this time round, and hadn't been overcooked as in the past. An optional 10% service charge was added to our bill.

Jakob, Bob, Martin and Pedro visited in July 2010. Bob thought that the quality of the food had improved from the last time he'd been here; some of the meat was a little salty, but not excessively so, and it was all tasty.