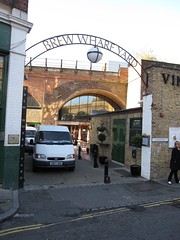 Brew Wharf was a pub and restaurant housed in a couple of railway arches near Borough Market, part of Vinopolis. Along with Vinopolis itself, it closed for good on 19 December 2015.

Pub and restaurant housed in a couple of railway arches near Borough Market, part of Vinopolis. It was originally a microbrewery too, but according to the April/May 2015 edition of London Drinker it ceased brewing in 2014.

Entry is past a covered outdoor seating area into one of the arches, which has some seating at ground level and then steps down to the bar and the rest of the interior (there's also a small lift platform for those who can't manage steps). This leads into the next arch, which has more seating and also houses the open kitchen. Finally, further in is the restaurant area, where one must wait to be seated. The feel throughout is somewhat clinical, not helped by the small rectangular floor tiling, reminiscent of communal shower rooms.

Kake visited on a Monday evening in September 2011. Although there are two handpulls on the long and rather sparsely-populated bar, only one of them was on, offering an in-house brew called Space Invader at a rather pricey £2 for a half-pint.

There were a fair few people in when I arrived around 7pm, though there were plenty of free tables too. I sat in the second arch, by the open kitchen, and the echoiness of the space in combination with the loud aircon from the kitchen made the place really quite noisy.