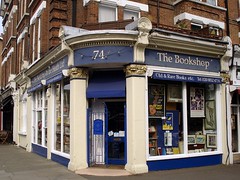 Bookshop On The Heath

Bookshop On The Heath

Note: As of June 2013, the Blackheath Bugle reported that the owners were selling the business. The bookshop's Twitter account announced in May 2014 that a new owner had been found, and as of Autumn 2014 it remains open.

The comments below predate the new management, and hence may be out of date.

The stock ranges from cheap paperbacks (£1.80 each or three for £5, as of May 2011) to rare first editions. The fiction paperbacks include a reasonable coverage of SF, both vintage and modern. They also have vintage children's books and annuals.

There's a London section, a selection of old OS maps, and decent coverage of other subjects such as cookery, art, music, and so on. Kake, who is very picky on the subject of Chinese food, found a rather exciting coffee table book on regional Chinese cookery for £15.

Accessibility: No step to get in, but like most small second-hand bookshops it's quite cramped inside.