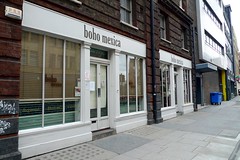 Boho Mexica was a Mexican restaurant in Spitalfields. It closed down in January 2016.

A Mexican restaurant in trendy Spitalfields.

Tables are arranged inside around a central bar area, with larger tables towards the rear of the premises. Menus and artwork are themed around 50s Mexican illustrations, with an added heft of Shoreditch trendiness as words and images are painted on the ceiling. Music is playing in the background.

There's a list of cocktails, including several varieties of margarita for around £6 each, fine if not spectacular, though a blueberry mojito (£7) was better. There are also a few bottled beers (and a couple of regular ones on draught) including Negra Modelo.

The menu is fairly short but well-focused. A range of tacos come in plates of three (for between £3.50-4 per plate), such as the "Carne DF" with grilled rump steak photo and are well spiced. A starter of guacamole (£4) photo was served in a stylish dish with some excellent corn chips, and came out quickly. A larger dish, the enchiladas de mole (£5.50) photo, chicken in a chocolate and chilli mole sauce served with herb rice, was certainly dramatically coated in the mole sauce, though the meat was a little dry.

However, service on Ewan and Kerry's visit was fairly consistently inept, if not actually ever mean-spirited (our waiters were all perrfectly friendly). Most orders had to be repeated, beer didn't arrive at all (and was charged twice on the bill when we asked for it again), and our order for two of the taco dishes somehow became translated into an order for all of them. Food showed up at different times with varying waits between them.