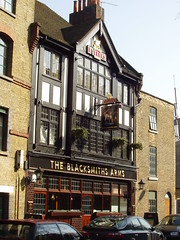 Fuller's pub on the edge of the Rotherhithe peninsula, not particularly close to any public transport other than the Hilton Ferry to Canary Wharf, but convenient for a Thames Path walk.

There is a horseshoe-shaped bar out the front with tables and chairs along each side photo, and dining room with table service out the back. The ladies' toilet (single, slightly cramped cubicle, clean enough though) is worth a visit for the amusing cartoons on the wall. There's a beer garden out through the dining room, though we've not been out there for a look yet.

They serve good Thai food at reasonable prices (main courses with rice from around £8 as of March 2009), as well as a small selection of more traditional pub food Photo of menu front and back. As of August 2009, there's a Sunday set lunch menu in addition to the normal menu, including Sunday roasts.

In May 2007, Kake and bob tried the £10 starter platter for two; the spring rolls were very good, and the rest of the platter was fine too. Pla rad pric (deep-fried cod with tamarind sauce, £9) was good, if a little sweet, and a generous portion. However, it wasn't spicy at all, despite being described as such on the menu. On a March 2009 visit, Ewan's vegetarian red curry was a perfectly reasonable example of the form photo.

Food is served 6pm-10pm Monday to Thursday, noon-2:30pm and 6pm-10:30pm Friday, noon-10:30pm Saturday, and 10am-10pm Sunday, and takeaway is also available during these hours. (They used to offer a delivery service, but we don't know whether this is still available.)

Food service on our May 2007 visit was polite, unobtrusive, and perceptive — even though they were very busy. Kake would say it was excellent for a pub. Bar skills are perhaps just slightly less excellent; bob has noted on two occasions that the staff didn't seem to know they were supposed to turn the pump clips around for beers that were off.

The place was fairly quiet on a Sunday afternoon, with four or five other customers. Music playing but not annoyingly loud, and quite chilled out. Landlord seems quite friendly.