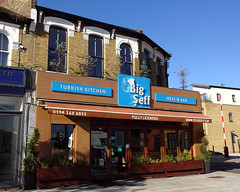 Turkish restaurant in Winchmore Hill. It opened in September 2017. They also do takeaway and delivery, with online ordering via Deliveroo.

It's not a huge space, seating around 60 people at most, but clever use of mirrors makes it seem quite spacious. Decor is in shades from light cream to dark brown, with accents of colour from red fabric rosebuds in small vases on the tables. Upright chairs flank dark wood-effect tables sized for groups from two to eight. A charcoal grill station runs along one wall by the door, with a small bar beyond, while non-grill cooking takes place in the kitchen upstairs.

Kake visited on a Friday morning in November 2018. I arrived before their actual opening time of 11am, but they were happy for me to come in and wait until they were ready. Music was playing, not too loud.

I went for Turkish set breakfast 2 (£7.60) photo, which consisted of fried egg, sausage, a feta-stuffed filo pastry, halloumi, feta, black olives, tomato, cucumber, two types of jam, honey, yogurt, and bread. The bread was fresh, and served warm. The olives were stone-in and had a good flavour without being overly salty; the feta also wasn't too salty. The egg was "smashed" rather than having a distinctly separate yolk, but this worked well in context. The cucumber was fresh, and the tomato had as good a flavour as you could expect in November. The yogurt was nice and tart. Overall, it was a nicely balanced plate.

Tea (included in the breakfast but £2 for additional glasses) arrived at varying temperatures; my first cup was lukewarm, my second hotter, and my third finally hot enough.

Accessibility: A small step to get in, around an inch or so. There's an accessible toilet on the level. Internal step in the ladies' cubicle (gents' not checked).