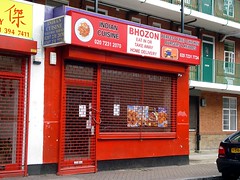 Bhozon was an Indian restaurant/takeaway in Rotherhithe, near Greenland Dock. According to Google Street View, it closed down by May 2012. As of July 2016 it's a restaurant called Shimla Pinks.

They do a vegetable thali for £9, with brinjal bhaji, tarka dall, mixed veg curry, sag aloo, and naan bread. doop and Juliet think the thali is pretty good; all dishes competently made, although the mixed veg in the mixed veg curry did seem a bit cooked to death. The vegetable jalfrezi was tasty and had a decent heat to it, and contained nice big fresh green chillies. The dall sambar is also very good, and they supplied free poppadoms.

Kake is rather less keen on this place than doop and Juliet, but doesn't dislike it enough to boycott it on a shared order, especially as their veg dishes seem butter-free which is handy for Juliet's veganness. doop's right about the dall sambar; it's better than most of the rest of the veg dishes we've tried.

They do have a couple of duck dishes (duck tikka, £3.45, duckling-off-the-bone jalfrezi, £9), which you don't always see. Kake tried the duck tikka; it was OK, but a bit salty.

We're not aware of a sister restaurant called "Fhermion", but there ought to be one.