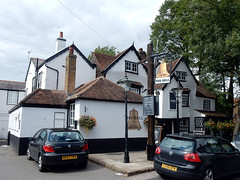 It's divided into several areas inside, each with its own ambience. Entry is into a dimly-lit stone-flagged area with seating tucked away here and there, leading up to the bar. Around to one side is a little snug-like area with a dartboard, flatscreen, and fruit machine. A carpeted dining area is filled with chairs and tables, and a sort of wide open corridor lined with a deceptively low but very comfortable padded banquette leads out to the garden.

Ceilings are low throughout, with sturdy wooden beams visible, and exposed brickwork pillars break up the space even further.

Kake visited on a Thursday lunchtime in September 2015. There were quite a few people in, including a large party of French tourists having lunch, but still plenty of places to sit. Music was playing, a little bland, but not too loud.

Four of the six handpumps were on, offering Courage Best, Courage Directors, Sharp's Doom Bar, and their own-branded Bell Ale (brewed by Twickenham Fine Ales). One of the other two handpumps had a turned-round clip for Greene King IPA. A pint of lime and soda was an oddly precise £1.48.

They have free WiFi via The Cloud (requires registration, but doesn't seem to validate the information you give).

According to a sign seen in September 2015, quiz night is every Tuesday from 8pm.

Kake's verdict: It's in a lovely old building, but overall it felt rather chain-like.

Accessibility: A very small step (2 inches or less) to get in, and step-free to the bar, seating area, and toilets once you're in. The cubicles in the ladies' are a bit of a squeeze. There's a ramp to the garden.