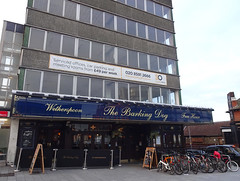 Wetherspoons pub in Barking, in the Good Beer Guide.

This is a fairly standard Wetherspoons, remarkable (if that's the right word) mainly for its proximity to Barking Station and its generous endowment of booths — nine in total, spread around the pub. An additional small point of interest is the sculpture of a sausage dog, mouth open as if to bark, which curls around a pillar in the centre of the pub.

There's no outside seating, but it does have a small sort of "smoking corridor" along the front of the pub, which is cordoned off from the pavement and has some shelter under the overhang of the frontage.

When Kake first visited around 6:14pm on a Tuesday evening in September 2013, it was quite full and I had to hunt for a table. No music was playing, but the pub was filled with the sounds of animated (some might say boisterous) conversation. There was a queue at the bar, too, despite four staff members working flat out. Service was friendly and efficient.

They have free wireless via The Cloud (requires registration, also free).

Child-friendliness: There's a baby change facility of some sort in the accessible toilet (not checked). As of 2013 the pub has a policy that adults in a party which includes children will not be served with more than one alcoholic drink each, and that only with a meal.

Accessibility: No steps to get in, and it's step-free to the bar, seating, and accessible toilet (which doubles as a baby change). Other toilets are each up a large step.