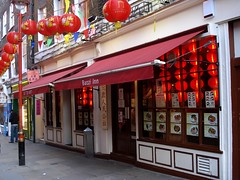 Small Chinese restaurant in Chinatown, offering Sichuan and Northern Chinese dumplings, noodle dishes, and "small eats". Note that as of November 2010 they don't take cards or cheques, and there's a £8/person minimum charge.

Inside, two rooms offer seating for around 35 people at small, blocky, square wooden tables and matching stools. Plastic vegetables and garlic garlands hang from the walls, flanked by pictures of Chairman Mao (the Chinese name of the place, 人民公社/rén mín gōng shè, translates as "people's commune").

Kake and doop visited on a Saturday lunchtime in May 2010. Arriving very soon after they opened at 11:30am, we were the only customers for the first little while, but it was over half full by the time we left an hour later. Our final bill for plenty of food plus Chinese tea was £11/head (service not included).

Three-sliver salad (涼拌三絲/liáng bàn sān sī; £4) photo consisted of bean thread noodles mixed with long thin shreds of carrot and kelp, served cold in a spicy but well-balanced sesame oil dressing. The textures of the three ingredients all worked well together, but it wasn't just a textural thing — the flavour was good too.

Spicy cucumber salad with chilli and Sichuan pepper (炝黃瓜/qiàng huáng guā; £4) photo was light on the Sichuan pepper, and the pieces of dried red chilli tucked among the cucumber pieces were more decorative than flavour-enhancing — still, although the flavour was subtle, the dish was both pleasant and refreshing. The dressing was a little too oily for doop's taste, but Kake thought it was fine.

Chengdu crescent dumplings in chilli oil (鐘水餃/zhōng shuǐ jiǎo; £5.20) photo had silky skins and a nicely-textured filling of pork and Chinese chives, well complemented by the slick of chilli oil they sat in. They also came with a very generous serving of minced garlic, sensibly situated as a pile in the middle of the dish, allowing the diner to choose how much to brave.

We also had one of the rice plates — red-braised aubergine with rice (紅燒茄子飯/hóng shāo qié zi fàn; £5.80) photo. doop really liked this; Kake felt it was competent but nothing special, though the texture of the (deep-fried) aubergine was good. Included free with this dish was a small bowl of soup photo, a simple affair of shredded seaweed in pork/chicken stock. doop liked the depth of flavour in this, though it was underseasoned to Kake's palate.

Kake visited again on a Tuesday lunchtime in November 2010. There were only a couple of free tables when I arrived a little before 2pm, though it emptied out somewhat during my visit.

Fragrant-and-hot "flower" beancurd (香辣豆花/xiāng là dòu huā; £4.50) photo had a nice touch of sourness from Chinese black vinegar, an interesting texture enlivened by the occasional Sichuan peppercorn, and chilli heat that built up slowly rather than being in-your-face. The crispy soya beans scattered on top were a little harder and chewier than they should have been.

Beijing pork noodles (炸醬麵/zhà jià miàn; £6.10) photo were a little disappointing; the noodles were overly soft, and the small amount of pork in the sauce was quite dry (and chopped rather than minced).

Service, as on our previous visit, was efficient rather than friendly.

Kake's verdict: I'd come back, despite having been disappointed by one dish; there are other things on the menu I'd like to try, and the small size of the dishes means a solo diner can try several things without wastage. I wouldn't plan to linger though — those stools do get a bit uncomfortable after a while.

James' verdict: I've eaten here a lot and have always found the food (I usually order soup noodle and a pork baozi) to be flavourful, filling, and excellent value.

Accessibility: One step up to get in. Another step down to get to the toilets and some of the seating. A step up from there to get into the toilet cubicles (which are also fairly small).