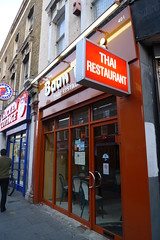 Baan Thai was a Thai restaurant/takeaway on Coldharbour Lane in Brixton. According to Google Street View, it closed down by June 2017.

Thai restaurant/takeaway on Coldharbour Lane in Brixton with online ordering via Just-Eat.

Laura and Kit visited in July 2010 for dinner. We had Thai fish cakes and vegetable tempura for starters, and khao pad pric (chicken fried rice) and the chef's special Baan Thai noodles for main courses. The fish cakes were good; the tempura however was very stodgy with too much heavy batter. Kit's chicken rice was highly flavoured and chili-spiced; Laura's noodles came with a good number of king prawns which appeared to be fresh (not frozen), in a coconut sauce.

Service was attentive if slightly haphazard — the fish cakes arrived well before the tempura, then the waiter asked if the mains could be served before the starters were taken away. The bill came to £36 for these four dishes plus four 330ml bottles of Chang beer.