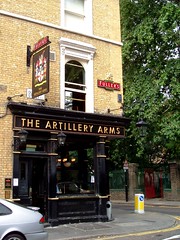 Small, crowded Fuller's pub off Old Street with a good range of beers.

Inside, there's a tiny island bar with table seating on either side, extending out towards the back, but still no more than six or seven tables. At the front of the pub, between the two entrances, are shelves with high stools and old-fashioned shallow glass partitions. Sport plays on a couple of large screens around the pub, and on a Wednesday evening visit in June, many people were avidly following a rugby match. Because of the pub's size, many drinkers take theirs outside onto Bunhill Row (opposite the historic cemetery).

There are six handpulls, with Chiswick, Discovery, ESB, London Pride, and HSB (£3.05/pint). There are a small number of other draught taps with basic lagers, as well as Strongbow. Service is very friendly.

Food is served Monday to Friday for lunch (noon-3pm) and dinner (despite not being mentioned on the website), with a short menu on the tables emphasising familiar pub basics (pie, sausage & mash, burgers, lasagne, etc.) with mains prices around £7-£8 photo of menu in June 2009. There's also a chalkboard with some daily specials listed. Ewan's spinach and goat's cheese omelette (£7) photo was a good size and rather tasty, though the accompaniments (a small limp salad mostly of iceberg lettuce, and a lightly toasted un-buttered slice of white bread, rather than the granary listed on the menu) were desultory at best.

There's an upstairs room with another five or six large tables and plenty of windows, which can be booked for functions.