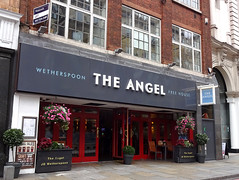 Wetherspoons pub opposite Angel Station, in the Good Beer Guide.

It's fairly bland inside, with relatively modern decor for a Wetherspoons. Entry is into a bare-boarded space entirely filled with high stool and table seating, and a corridor leads back from here towards the kitchen, lined with booths on one side and small tables on the other. Alongside this corridor is a raised dais with a combination of banquette and freestanding seating.

Kake visited on a Tuesday morning in September 2017. There were a fair few people in when I arrived around 10:30am, though still plenty of seats free. No music was playing, as is usual for Wetherspoons, but there was a pleasant buzz of conversation.

Child-friendliness: There were two or three children in during our visit, running around and enjoying themselves; neither staff nor customers seemed to object to this.

Accessibility: No steps to get in, but there's only very limited normal-height seating on the level. There's a RADAR-locked accessible toilet on the level at the back; other toilets are down a flight of stairs.