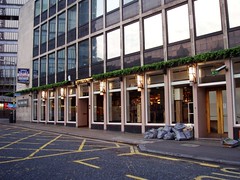 This was a branch of the All Bar One chain on London Bridge Street. According to the Apr/May 2016 London Drinker magazine, it has now been demolished as part of the London Bridge station redevelopment.

A branch of the All Bar One chain on London Bridge Street behind London Bridge station. In March 2010 it is opposite where New London Bridge House is being demolished and close to the rising core of the Shard.

secretlondon went with some colleagues on Thursday night in March 2010. It was very full and some couldn't get seats. I suspect most people here are having a drink after work. All Bar Ones have a kind of safe feel.

The are two parts to the bar - the main area on the level and a raised area with steps to the right as you walk in. The toilets are through this raised area and down a flight of stairs. The raised area had a small sign saying it had been booked but everyone has to walk through this area to go to the toilet regardless. There is a toilet on the level to the left of the bar marked 'disabled' and 'key behind the bar'. It was so busy I think you'd struggle to get a wheelchair through all the people and tables.

They have some hand pumps and some draft lagers and beers on tap such as Erdinger wheatbeer. It also sells Kriek cherry beer in bottles, some cocktails and a small selection of premium soft drinks. We tried some of the food to share - chips with mayonnaise and crisps with salsa and sour cream. The crisps really were crisps not tortilla chips.

There is no outside seating.