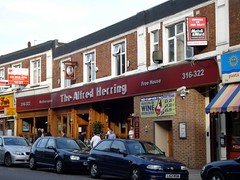 It's not perhaps one of the more interesting examples of the breed, having neither interesting architecture nor anything else particularly unusual about it. The ceiling is quite low, and the decor is basically just Standard Pub.

However, it does have five handpumps, and on Kake's September 2008 visit the beer included two interesting options (Brewsters Hop-A-Doodle-Do and Freeminer Iron Brew) and the one I tried (Iron Brew, £1.99/pint) was fresh-tasting and served at an appropriate temperature. The other three handpump options were Courage Best, Courage Directors, and Marston Pedigree.

I was there early evening on a Sunday, and the place was fairly full, though I still found a seat near the front windows with no trouble. Most of the other customers were male, and everyone within earshot was speaking languages other than English. I didn't realise until I was about to leave that the four young chaps who'd been staring at me from the bar were actually just too shy to ask if they could share my table.

There's a heated verandah at the front for the smokers, but a notice warns that alcoholic drinks can't be taken out there.