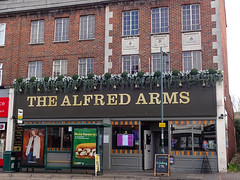 It's a single open-plan room, though a couple of square pillars in the centre break the space up a bit. The bar is against the side wall as you enter, lined with half a dozen high chairs. A couple more high chairs cluster around a high table by the pillars opposite, with a normal-height table and chairs here too.

Otherwise, all the seating is around the edges of the room; a banquette runs around two of the walls, flanked by varnished wooden tables and chairs upholstered in shades of purple and green. The large gap this leaves in the middle of the room is filled by a pool table, and a dart board hangs on the wall beyond.

Decor is on the smart side of traditional, with a relatively subdued patterned carpet, dark paintwork, and a set of large pigeonholes on one wall containing paraphernalia such as vases, busts, a globe, and a star-shaped clock.

Kake visited on a Thursday afternoon in November 2017. There were a handful of other customers in when I arrived around 1:30pm, and more were in and out while I was there; by the time I left at 5pm, there were around 15 or 16 people in, half of them sitting along the bar.

No music was playing, but the flatscreens were showing film trailers with the sound on (the same ones over and over and over again). One of the two handpumps was clipped for Sharp's Doom Bar (£1.80/half), which was in decent condition. A pint of lime and soda was free.

They have WiFi — ask at the bar for the password.

Child-friendliness: According to a sign seen in November 2017, no children are permitted after 8pm.

Accessibility: No steps to get in, and none to the bar, seating area, or toilets.