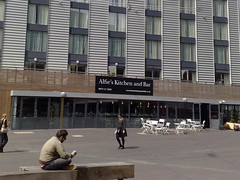 Alfie's was a restaurant and bar in the B2 hotel in Bermondsey Square, off Tower Bridge Road in Bermondsey. It has now closed. As of early 2012 the premises are occupied by a brasserie called Gregg's Table.

This is a restaurant and bar, part of the B2 hotel in Bermondsey Square, off Tower Bridge Road in Bermondsey. It opened in April 2009 and was running an opening offer of buy-one-get-one-free when secretlondon visited (This continues until 31 May). It seats 90 inside (and 120 outside) and also has a deli and wine shop which secretlondon missed.

Alfie's is a modern restaurant with funky chandeliers secretlondon's work colleagues loved. It had a set of teapots with London-themed tea cosies we liked too. The name is probably a reference to the 1966 film Alfie starring local boy Michael Caine.

secretlondon and some colleagues visited in April 2009. We had the set lunch menu which was £12.50 for two courses or £17 for three. Side dishes with the mains cost £3 extra. The lunch menu gives you a choice between two starters, two mains and two desserts. On our visit it was mushroom salad or fish soup to start, bangers and mash or fish pie for mains, and rhubarb and custard or cheese for dessert. We were told there was a vegetarian menu but no-one asked for it.

We were given a variety of bread to start. This was nice, secretlondon particularly liked the fruit one. Eventually our starters arrived, waiting ages was a pattern for the entire meal. secretlondon liked her field mushroom salad photo, colleagues were impressed by the large amounts of salmon in their soup photo. After another long wait (over an hour after we ordered) the mains arrived. The salmon and haddock pie was a fake (heretical?) pie as it had no pastry at all! photo We were also surprised that a dish of salmon and haddock pie with an egg and cheddar mash was just a pie topped with mash which contained an egg. If we had realised that we would have ordered sides. It was really nice though and contained a variety of seafood including prawns. The bangers and mash was two pork sausages with mash photo and was apparently fine.

By the time we had finished the mains most of our party fled back to the office leaving the remainder to finish off everyone else's desserts. The time it took was fine for an evening but not for a lunch hour when people are time pressed. Nobody ordered the cheese but the rhubarb compot and custard pudding photo was nice.

Alfie's makes a nice addition to the area and we enjoyed the food. The timing was a bit rubbish for local office workers but it is newly opened and still settling down.

Accessibility: Step-free access and no stairs to the toilets. There may have been a disabled toilet too, I can't remember.