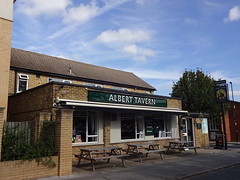 It's a pleasant enough 1960s estate pub, with a low ceiling and an interior divided into several different areas including a wooden-floored section with high tables, and a couple of tucked-away carpeted sections with banquette seating. A dart board hangs on one wall. There are a couple of picnic benches out the front, and a part-covered patio smoking area at the back.

On a Wednesday afternoon in August 2016 there were several people in when I arrived around 2:45pm, in groups of various sizes including what looked like a family, and plenty of lively but not overly-loud conversation. Music was playing fairly quietly. On a Friday morning in August 2019 there were two other customers just after their opening time of 11am, and others trickled in while I was there, eventually including a large multi-generation family group. Music was playing, not too loud.

Standard pub food is served all day from a chain-wide menu.

They have free WiFi via The Cloud, which requires signup but doesn't require you to use your real email address. However, we couldn't get this to connect in August 2019, and there are no plug sockets convenient for using a laptop at a table (though the member of staff kindly went all round the pub looking for one for us).

According to a notice seen in August 2016, there's a quiz every Thursday and a meat raffle on Sundays.

Child-friendliness: They have at least two highchairs, the type with no tray and very little back support. There are nappy change facilities in the accessible toilet.

Accessibility: No steps to get in, and step-free throughout inside, including to a RADAR-locked accessible toilet with nappy change facilities. A small step to the back patio.