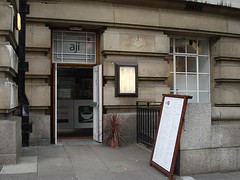 Main courses are a choice of noodle soup, yakisoba, and curry-and-rice. The noodle soup is perhaps the most fun option on the menu, allowing you to mix and match your choice of noodles (ramen, soba, or udon), broth (chicken-miso, chicken-shoyu, kelp-bonito, or veggie-miso), topping (pork, chicken, prawn, or veg) and up to three garnishes (beansprouts, leek, seasonal greens, sweetcorn, bamboo shoots, wakame, nori, shiitake, tofu, pickled ginger, or boiled egg).

Kake visited for a late lunch on a Monday in July 2008. I arrived a little after 2pm and there were only a couple of other customers. I went for the noodle soup with ramen noodles in chicken-shoyu broth with chicken, greens, shiitake, and tofu (£7, like all the other mains) photo. Unsurprisingly, given the mix-and-match gimmick and the speed of delivery, there was very little sense of amalgamation in the dish, but this is perfectly forgivable under the circumstances. However, the broth was also rather lacking in complexity and depth, which there is somewhat less excuse for. The chicken was a bit dry, too. Still, I felt the balance of noodles to meat to vegetables to broth was spot-on, and the noodles and greens (spinach, as it turns out) were cooked just right.

Although they're licensed, I went for the unlimited Japanese green tea (£1); this arrived in a pot large enough that I never needed to ask for a refill. It was made with a teabag, but for the price I didn't expect anything else. Next time I might try one of their "Japanese alcopops" (shochu-based fruit drinks, £3.50 for 250ml).

The obvious comparison is with Wagamama, and indeed there is one similarity in that large signs on the walls insist that you should not feel put out if some of your party are kept waiting for their food while others have already been served. The tables are smaller, though, each designed to seat six (and with a cunning design trick to allow a two-person and four-person party to sit at the same table without feeling thrown together - see photo).

Kake's verdict: I'd choose it over the Yo Sushi across the road.

Accessibility: Step-free throughout, and there's an accessible toilet (looked fine on a quick squint through the door).