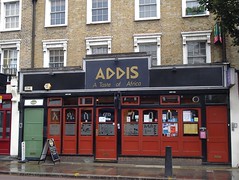 Kake and friend visited on a Thursday early evening in October 2013. We hadn't booked, but there were some free tables when we arrived around 6pm. There was a temporary-looking sign on the door noting that they were only accepting cash.

Like most Ethiopian restaurants, they have plenty of vegetarian and vegan dishes on the menu.

We shared an order of yetesom beyaynetu (mixed vegetarian combination; £9) and one of ayeb be gomen (spinach and cottage cheese; £5.50), all served together on top of injera photo. The yetesom beyaynetu included six different dishes, all with distinct flavours and textures. We particularly liked the chickpeas, cooked soft and served with a flavourful browned crust from the pot they were cooked in. The ayeb be gomen was beautifully tangy, and had a high proportion of cheese to spinach in comparison with versions we've had elsewhere in London. The injera was nicely sour.

A side order of falafel (£9.25) photo seemed rather expensive for what we got: six falafel plus mixed salad, pitta bread, and a blob each of hummous, aubergine-in-yoghurt, and carrot-in-yoghurt. The individual components were fine if generally unexciting aside from the nicely fried and flavourful aubergine.

Service was fine; other reviews have described it as slow, but we didn't find it particularly so, possibly because we arrived fairly early in the evening. No service charge was added to the bill photo.

Kake's verdict: I'd come back, particularly if I was dining with a vegetarian, but I wouldn't order the falafel again. I'd also make sure to book if I was coming on a Friday/Saturday or later in the evening.

Another diner writes: On ordering a pot of Ethiopian coffee we were told that it would take half an hour to prepare (we declined). It may be worth next time pre-empting this and ordering earlier than at the end of the meal.

Accessibility: Two steps to get in. Toilets are in the basement, down a flight of stairs with a handrail on one side.