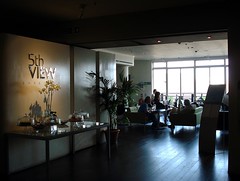 A bar on the top floor (the fifth floor) of Waterstone's bookshop on Piccadilly.

There are two main areas to this bar: the main room, with windows looking out over the rooftops of St James's and Westminster (the towers of Battersea Power Station are visible in the background); and a smaller space further in, amongst the bookshelves. The main room is long and rectangular, with seating alongside the windows (which have a balcony area on the other side, though the doors are kept fastened), as well as couch areas. Reservations are taken for tables, with the window views understandably most popular.

On our Friday late afternoon visit in February 2009, most tables were taken or were reserved, but our party of three managed to squeeze onto a little table. Furniture is fairly perfunctory, but service is friendly and efficient.

The focus of the menu is the cocktails, although they also do an extensive range of beers and wines, including some rather surprising options photo of menu. Food is offered in addition, though this is mostly in the form of sharing platters and light bites.

The cocktails are rather decent photo, priced around £8, and covering most of the classics. They make a particular effort with the martinis, for which they offer a selection of premium gins, and these are poured at the table -- they bring out the frozen bottle, and ask how dry you like it. Olives are also provided in a bowl.