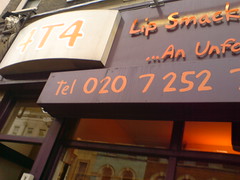 4T4 was an African (basically Nigerian) cafe and takeaway on Camberwell Church Street in Camberwell. It closed some time in 2009 or 2010, and as of April 2010 it has been replaced by an Indian restaurant/takeaway called Cinnamon.

This is an African (basically Nigerian) cafe and takeaway on Camberwell Church Street in Camberwell. It has a few tables but your food is brought to you on a tray and the atmosphere is more cafe like than a restaurant.

secretlondon visited one early Saturday evening in November 2008 as part of her plan to visit every food place ever. There was a TV showing football with sound on. Think they are licenced.

Accessibility: No stairs but entrance could be a bit tight. Toilet on same level but has no support bars.