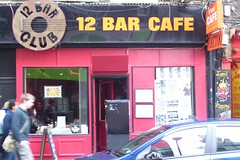 12 Bar Cafe was an American-style diner in the heart of guitar land, just off Charing Cross Road. It was renamed to 12 Bar Club by 2012, and moved to the old premises of Phibbers in Lower Holloway by April 2015.

An American-style diner in the heart of guitar land, just off Charing Cross Road.

It serves basic cafe dishes - omelettes, ciabatta with chips, pasta dishes, and some dishes of the day. But it's the burgers that interested us the most - all named after genres of music. We were very impressed with the fact that there were just as many veggie burgers as regular.

Food is served 9am-9pm daily. Bec had the Punk (£5.95, with chillis and cheese) and was very impressed by the spiciness. Holly went for Ska (£5.95, with fried onions, cheese and red chillis). The same toppings and name apply to the meat burgers. Sean highly rated his meaty Blues (also £5.95, with blue cheese and bacon). Bec was happy to see yellow French's style mustard and Hellman's brand mayonnaise. That's authentic Yank!

The interior is a painted red and there's a framed NME with John Peel, as well as collage of musicians photos. Bec was pleased by the White Stripes - well, they match the interior. There's a jukebox (Flickr photo), though I don't know if is working or for show - the staff were playing the Clash when we were there.

I definitely want to come back to sample the nachos and during an evening to check out some bands.

On Sunday, there are open mic nights starting at 5:30pm.