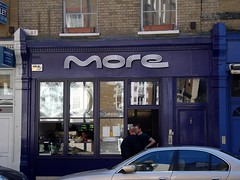 More was a small cafe/restaurant on Tooley Street near the More London development and London Bridge Station. It closed at the beginning of August 2010 "for staff holidays", and never reopened.

As of early 2012, the premises are occupied by a Vietnamese place called Velo; see Chowhound thread.

Small cafe/restaurant on Tooley Street near the More London development and London Bridge Station, opened in May 2009. It's run by the people who started up the Real Greek and Livebait chains.

The decor is modern and fresh-looking, with white walls set off by a deep-red floor and a purple ceiling. The chairs are made from see-through red plastic. There are 10 high seats at the bar, and about 20 seats at normal tables. Samples of the day's dishes are displayed in the window photo.

We've only been for lunch so far, but it is open in the evenings too.

The lunch menu photo isn't divided into starters or mains, and is slightly confusing at first glance. Our best guess is that it's arranged in order of lighter (marinated olives, £3) to heartier (ribeye steak, £15.20) with a couple of side dishes at the end. Filtered water (both still and sparkling) is offered free of charge, and there's also a wine list with a couple of dozen choices, many available by the glass.

Kake and bob visited for a late lunch on a Friday in May 2009, just over a week after they first opened. It was empty apart from staff when we arrived a little after 2pm, but shortly after we were seated a table of four arrived who seemed to already be regulars. Music was playing, but fairly quietly. bob had the devilled crab (£7.90) photo, accompanied by some new potatoes with lemon and mint butter (£3.50), while Kake went for the artichoke and goat cheese salad (£6.40) photo. The artichoke and goat cheese salad was great; the use of fresh herbs was just right, the pine nut dressing worked well, and it all just went together very well. bob finished with a slice of banana and date streusel (£4), which he seemed to enjoy.

secretlondon visited in June 2009, also for lunch. I had the polenta photo, the chocolate dropata photo and a bottle of lime crush. I had a 50% off voucher, but my final bill would have been £21 at full price. It was very nice but too expensive for lunchtime passing trade, I think. It's more expensive than the other lunchtime places in the area and seems to see itself as "foody" rather than an office worker drop in.

secretlondon has since been back for takeaways through the hatch onto the street. I find their coffee is so-so but their sandwiches (about £4) and cake-of-the-days are lovely (£2 ish), and probably the best in the area. They do a meal deal for lunch which is a drink such as freshly squeezed orange juice, a sandwich or a salad and fruit salad for £6 ish. secretlondon has had this a lot.

Accessibility: Can't remember if there was a step to get in, but the toilets are down a steep set of stairs with a sturdy handrail on both sides.