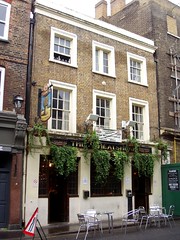 Note: The Wheatsheaf is due to be closed and (at least partially) demolished in January 2009, due to work associated with the Thameslink upgrade. Signs inside advertise a final closing party on 7 January, the last day of trading.