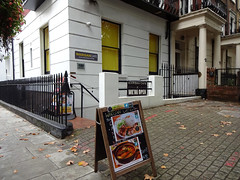 Warisan was a Malaysian cafe in a basement near Paddington Station. In May 2020, its Facebook page announced that it would be closed until further notice, and it seems never to have reopened. As of September 2021 the premises are occupied by a different Malaysian cafe called Bonda Kitchen (a name that Warisan itself also seems to have used at some point) with a different menu focusing on dim sum, bao, rice, and noodles.