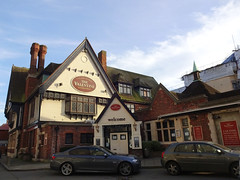 The Valentine was an enormous pub near Gants Hill Station. It closed down in February 2017.

Enormous pub near Gants Hill Station, and I mean really enormous. The sofa area alone - twelve spacious and comfortable two-seaters — is bigger than many pubs, and there are at least three other areas of similar size.

Kake and friend visited on a Friday lunchtime; it was pretty much empty and most of the handful of customers were in for food. The bar staff seemed slightly nervous for some reason.

We tried the burgers — £5.75 each, including chips, with a choice of beef, chicken, or spicy bean burgers. The chips were OK, nothing special, and the spicy bean burger was a pre-made breadcrumbed thing. It was all competently prepared, though.

Other menu options include sandwiches, which are priced between £4.05 (e.g. tuna mayo) and £5.40 (steak and onion). Main courses are based around the usual pub staples. Notably, they have a "two main courses for £9" deal, which apparently applies even to the barbecue chicken melt, which is normally £9.55. The cheapest main is sausages and mash (£7.05) and the most expensive is rack of ribs (£10.55, and the only exclusion from the £9 deal).

Karaoke on Wednesdays, and live bands on Saturdays — apparently gets packed out both nights.

Kake's verdict: I don't think I'd like it here in the evening, and it doesn't really feel like a pub for people who like pubs, but if you have to be in the area anyway then it seems a good enough meeting point. Shame about the lack of interesting drinks, but I think they serve tea and coffee, and the sofas were great, so it might be a decent place to kill some time if for some reason you have some to kill in Gants Hill.