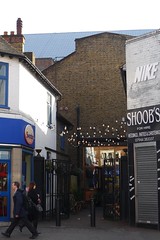 A cavernous but pleasant pub in a former tramshed, just near Tooting Broadway Station. It's easy to miss, as it's accessed via a small passage off the street, between two shops, and there's no name over the door.

Despite being a former Scream pub, this has been taken over by Antic and refitted. The result is another in their familiar genre of mismatched furniture, quirky antique shop fittings and relaxed ambience, but transformed by the vast warehouse-like dimensions of the space photo.

There's generous seating in booths and banquettes on a dais along the wall opposite the bar, with eight or more tables in the middle of the room, couches near the front door and more on another raised area at the back (where there's an ornate fireplace). There's also far more seating upstairs on a mezzanine overlooking the main bar area, though it wasn't necessary to make use of this on any of our visits (a Wednesday evening in May 2009, a Thursday evening in September 2010, and a Wednesday evening in July 2011). They have a table tennis table at the back. There are four picnic tables outside in the entry passage, as well, for smokers.

The bar has three handpulls. On all our visits, two of these were dispensing Purity Pure Gold and Purity Mad Goose (£3.20/pint as of September 2010), while the third has varied between Purity Ubu (May 2009), Black Sheep Bitter (September 2010, £3.30/pint), and Harveys Sussex Best (July 2011, £3.10/pint). Stowford Press cider (not a "real cider", but a nice change from Strongbow) was available in July 2011. They have several basic lagers on draught, including Grolsch Weizen and Amstel, but nothing spectacular. There are however plenty of interesting bottled beers including several American ones.

They don't seem to do any proper food, but as of July 2011 they do have sausage rolls for £1 apiece, displayed under a clear domed cover behind the bar. Kake tried one and thought it was pretty good, with plenty of nicely-textured meat (neither paste-like nor gristly), and a nice layer of something that tasted like caramelised onion just below the pastry at the top.