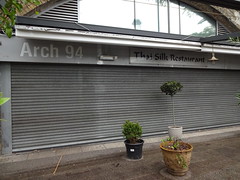 Thai Silk was a large Thai restaurant and bar underneath the railway arches behind Southwark tube station. As of late 2019 it seems to have closed; its website has vanished, the shutter was down with no explanation on a Monday lunchtime in September 2019 (pictured), and commenters on the London SE1 forum also report finding it shuttered when it should have been open.

A large Thai restaurant and bar, underneath the railway arches behind Southwark tube station.

The restaurant area is quite dimly lit but very spacious, with large tables and chairs, plenty of elbow room for diners and table space for sharing dishes. There is a separate bar area with a cocktail menu, and a sizeable outside area at the front (with large enough umbrellas over the tables to allow smokers to shelter from the rain). Judging by the crowds of office workers standing outside, the bar can get very busy on Thursday and Friday evenings (the website states there is a resident DJ on Fridays).

Kat and a large group of colleagues visited on a Friday lunchtime in October 2015. We hadn't booked and were expecting to be sat in smaller groups, but were quickly shown to a large table with enough room for all of us. Most of us chose from the lunchtime set menu, which was very good value at £7 for two courses. Vegetable spring rolls were piping hot and crispy, although the accompanying sauce had an unfortunate tang of lemon washing up liquid to it. Stir-fried pork with ginger and mushrooms came with a large quantity of egg noodles (rice was also available as an option) and was perfectly fine, with the right amount of grease and salt to satisfy Kat's tastes. The staff were very efficient and were able to immediately suggest a gluten-free option for one of our party.

Kat's verdict: a decent cheap lunch option for the area, though the a la carte menu looks a lot more pricey. I'd probably avoid it in the evenings unless I wanted some bargain basement cocktails.

Accessibility: the restaurant area has one step to get in (marked with yellow and black hazard tape!). Didn't check the toilets.