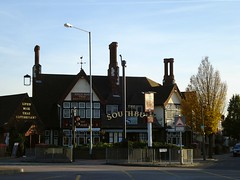 The Southbury was a pub in Enfield Town. It has now closed. As of 2015 the premises are occupied by a Thai restaurant and bar called The Meeting.