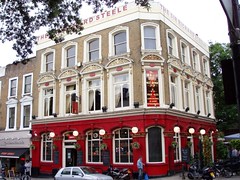 A large ramshackle pub on Haverstock Hill (between Chalk Farm and Belsize Park stations), which as of mid-2011 has been taken over by the Faucet Inn pub company.

This pub comprises mainly a large room curving around a prominent bar area, with a number of smaller but quite capacious rooms tucked away behind the bar in various directions. There's a large beer garden outside, just off the street, with plenty of tables and some cover.

The most striking feature of the pub is that it's crammed with antique curios, signs and ephemera. There's a painted ceiling which isn't quite the match of the Sistine Chapel but is still somewhat impressive. Seating is comfortable, but the place gets very busy of a Friday evening, with a range of clientele from long-time regulars to local kids.

On Ewan's June 2008 visit in June 2008, ales on handpump were Bass, Adnam's East Green Carbon Neutral, and a tasty pint of Flowers IPA (which they had on offer at £2/pint). Other standard lagers were offered, as well as a wine list. In June 2009, Kake noted they also sell Aspalls cider.

Accessibility: A couple of steps up to get in. However, there's level access from the street to the beer garden, and only a sort of ridge-like thing to get over between the beer garden and the interior of the pubs. Toilets not checked.