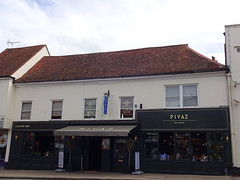 It was previously known as Pivaz, part of a group with other branches in Hackney and Brentwood. However, this one was sold to a different owner in mid-2020, and changed its name to Roza around the same time. We haven't visited since the rebrand, and so some or all of the details below may be out of date.

It has a interesting interior with several different areas. The decor is upmarket without being pretentious, and detailed without being garish. Near the entrance is a red velvet banquette area, with small tables set near the windows. The space leads around here past a bar with half a dozen bar stools and a couple of little tucked away cubbyholes for a more private experience. Finally there's a larger dining space with a semi-open kitchen at the back, seating around 36 on comfortably-padded blue velour chairs and banquettes.