Blog
Contact
About
(redirected from Princess Of Wales, SW19 3BP) 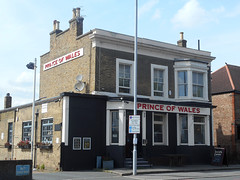 Pub near South Wimbledon Station. It was previously owned by Young's, but became a freehouse in early 2013. (See old version of this page for an assessment of the pub before this change.)

The front part wraps closely around the bar, with high tables as well as some normal chairs and tables. To one side is a small area with a pool table. The bar has six handpumps, though on our May 2015 these were clipped for only two ales — Sharp's Doom Bar and Young's Bitter.

Further back is a larger area photo with widely-spaced small tables, plainly painted walls, some nice zigzag-patterned hardwood flooring, and old-fashioned touches such as a sideboard and mantlepiece with mantel clock. A dart board is mounted on one wall, though directly above one of the tables. Windows look out from here onto the beer garden.

Kake visited on a Friday lunchtime in May 2015. There were four or five other customers in when I arrived a little before 1:30pm, all except one of them either playing pool or spectating. Music was playing extremely quietly.

A pint of lime and soda was a pleasingly cheap 50p, and the food menu photo was also very well-priced. Small nachos (£3) photo was actually relatively large; certainly more than enough for lunch for me. Unfortunately it was delivered on a painfully hot plate, with no warning of this, and no napkins were provided either. However, the quality was fine for pub nachos.

Accessibility: Three steps up to get in, though there's a handrail on each side. Step-free to the bar, seating area, and toilets once you're in. Steps down to get to the beer garden. There's also sometimes access to the garden through the carpark, but that also involves at least one step, and you'd then need to go up steps to get to the bar and toilets.