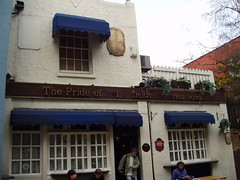 Pfig visited on the 23th of July 2008. We had Doom Bar and Brewers Gold, and everyone agreed they were very good.