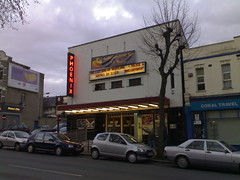 Wikipedia says it's "probably the oldest continuously-running cinema in the UK".