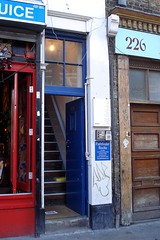 Marxist bookshop at the junction of Bethnal Green Road and Brick Lane.

It's a little bookshop selling books published by Pathfinder Press, a US-based Trotskyist organisation. The UK organisation calls itself the Communist League.

secretlondon went there to get a book she needed for an essay. It is on the first floor, up a small flight of stairs. The door was on the latch but someone opened it when I knocked. They have a small room of books including a selection in French and Spanish.

I think they only sell books published by Pathfinder. I'd recommend you ring first to check stock before visiting.

As of October 2012 there are no set opening hours (according to an email from one of the volunteers who run it).