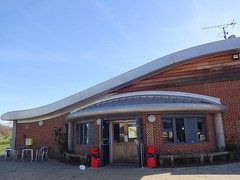 Cafe at the edge of Lloyd Park in Croydon, just a few steps from Lloyd Park Tram Stop.

Seating for around 40 people is provided at sturdy reclaimed-wood tables flanked by upright wood-and-metal chairs in contrasting shades of white and turquoise; half-panelled walls reflect the same colour scheme. A high ceiling reveals curved exposed beams, painted in a deep burgundy. Perhaps surprisingly for its location in a park, the windows are fairly minimal and provide only a little natural light. A service counter at the back offers a display of pastries.

Kake has visited twice now, most recently in March 2019. On a Monday morning in March 2018 I was the only customer when I arrived at their opening time of 8:30am, but several others were in and out while I was there, some apparently regulars; by 11am it was quite lively, with around a dozen people in. No music was playing in the cafe, but the radio (Magic) from the adjoining kitchen was audible. On a Thursday lunchtime in March 2019 there were no other customers when I arrived around 1:30pm, but two turned up while I was there. Music and adverts were playing on the radio.

Eggs benedict (£6 in March 2018) photo was good, and I'd order it again. The bacon was good quality, cut thickly, and not too salty. The eggs were just right, with runny yolks but properly-set whites. The hollandaise was smooth, but a little too bland and sweet for my taste. The muffin was good quality, toasted and buttered.

Breakfast bruschetta (£5 base price plus £1 for a poached egg on top in March 2019) photo was also good. The bread was thinly sliced German-style 100% rye, lightly toasted, which worked very well with the roasted cherry tomatoes and slivered red onions. Fresh basil added extra flavour. The avocado was fine, though perhaps a smaller portion than one might expect. The egg was poached properly, with a runny yolk and a swirl of well-set white.

On both occasions a cup of tea (£1.20) arrived weak as requested, and was a very generous size.

Child-friendliness: They have at least three highchairs, with straps but no trays and very little back support. There were several children in during our first visit.

Dog-friendliness: Dogs are permitted, though a sign warns that they must be kept on the lead.

Accessibility: No steps to get in. Tables are widely spaced, and neither chairs nor tables are fixed to the floor. All the toilets are around the side of the building, again with no steps; there's a RADAR-locked accessible one, and in addition one of the cubicles in the ladies' has a door which opens outwards.