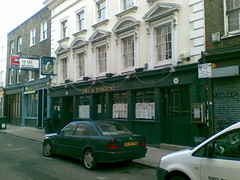 Pub just off Shoreditch High Street. An old man's type pub, rather than yet another one of the trendy bars more common to the area.

The only real ales on offer were London Pride (£2.90) and Greene King IPA; there were other handpumps but the things were turned round. The Pride was OK but not wonderfully well-kept.