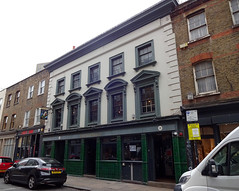 It's had several incarnations over the years (see older version of this page for a description of its pre-2010 life as an "old man's type pub"), but as of 2019 it seems to be positioning itself as something of an old-school gastropub.

They've gone for a bare-bones approach inside, with exposed boards on the floor, a ceiling painted to resemble tobacco smoke staining, and mottled plasterwork on the walls. Tables are made from slabby wooden boards with a weathered look, and seating is a combination of banquettes, low stools, and high stools.

There's another bar on the first floor, which may not always be open. Out the back is a courtyard-style beer garden with cracked flagstones, tall tables for standing at, and a few high stools around the edges.

Kake visited on a Thursday lunchtime in August 2019. I was the only customer when I arrived around 11:15am, but two more turned up half an hour later. Rock music was playing, fairly loud. Service was friendly and helpful. The handpumps were clipped for Young's London Original and Brakspear Oxford Gold, and a pint of lime and soda was £2.20.

I wanted a snack, so ordered the salt beef croquettes (£6.50) photo from the starter menu. They were nicely presented, and just right for a snack. The saltiness of the beef was well-controlled, and the croquettes had a pleasingly loose texture, just on the edge of falling apart. Each one sat on a pile of mustard cream sauce, which was nice enough but I wished there had been less of it, or at least to have it on the side, since it did rather dominate. There were some very good house-made pickles too: carrot, kohlrabi, and mushroom, all thinly sliced and well-marinaded.

Kake's verdict: I'd happily order those croquettes again, and there are other interesting things on the starter menu, though the mains look a bit boring. (I'm judging it more as a restaurant than a pub, since the likelihood of me coming to a Shoreditch pub for the beer is very small.)

Accessibility: A step to get in at all the entrances, ranging from average to large. It's level to bar, seating, and RADAR-locked accessible toilet once you're in. No step to the ladies, just some unevenness on the floor, but the door is very heavy and the cubicles are quite small. A step to the back garden.