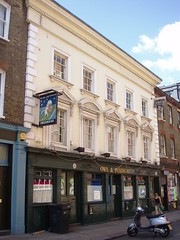 An old man's type pub, rather than yet another one of the trendy bars more common to the area.

The only real ales on offer were London Pride (£2.90) and Greene King IPA; there were other handpumps but the clips were turned round. The Pride was OK but not wonderfully well-kept.

Comment added by Sean: Last visited on 2/9/2008. London Pride and Brakspear this time. Bar billiards is fully functional - it's Marna's favourite. There's also a TV for sporting events, but it's usually turned off.