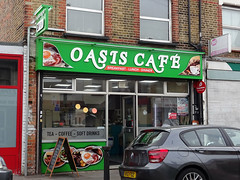 Oasis Cafe was a British and Caribbean cafe in Thornton Heath. According to Google Street View, it closed down by May 2019 and was replaced by a Caribbean cafe called Life Food Hut (or possibly LifeFood Hut).