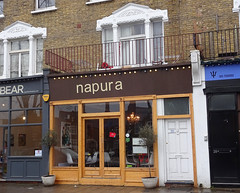 Small Portuguese restaurant in Nunhead. It also does takeaway and delivery, with online ordering via its website.

It reopened in early 2016 after an extended period of closure during 2014-2015, though it's still run by the same people. There's a little more seating space than before, though still for only around 30 people. The tables are varnished wood, flanked by a combination of padded banquettes and white bucket chairs. Art by local artists, all for sale, hangs on light brown painted walls, with contrasting cream paintwork along the skirtings and doorways. A curved bar with gantry in one corner has no taps for draught beer, but a display of wine bottles on shelves behind.

Kake visited on a Wednesday lunchtime in February 2017. I was the only customer when I arrived around 1pm, though it looked like another party had just left.

I went for the bacalhau à Brás (£12.50 including salad) photo; a dish of scrambled eggs with salt cod and matchstick fries. The eggs were dry rather than creamy, and I felt they were a bit underseasoned. The salt cod gave a nice textural contrast, but again I felt that perhaps a bit too much of the salt had been removed. The matchstick fries were nicely browned; being unfamiliar with this dish I'd been expecting them to be on the side, but it turns out that they're incorporated into the eggs and hence soft rather than crispy. The salad was fresh and (unlike the eggs) seasoned nicely. I was initially sceptical of the dried oregano on top, but actually it worked fine.

Service was friendly, welcoming, and efficient even though there was only one person on duty, doing both front-of-house and cooking. Tap water arrived on request, in a large carafe that was left on the table. No service charge was added to the bill.

Before the refurbishment (and menu changes), secretlondon ordered via Hungry House one Friday evening in January 2010. I had "chicken meal 1" (£13.50), which included a whole peri peri chicken, a starter, a side, a dessert and two cans of Coke (or Diet Coke). I chose to have my chicken hot (medium, hot or extra hot) with a rissol starter, double thick chips (could have chosen thin chips too), and cheesecake. It took about an hour to arrive. The rissol contained prawns. The chicken was in pieces in a chilli sauce photo rather than dry and whole like Nando's; it was fine, but a bit oily. The chips were actual chips, not french fries photo, and "double" apparently meant a portion for two. They sent two pastel de nata (custard tarts) rather than cheesecake.

secretlondon's verdict: I'd order from here again, but it looks poor for vegetarians.

Child-friendliness: They have at least one high chair (without tray)

Accessibility: A fairly large step to get in, with no handrail and a slightly heavy door. No further steps to the toilets.