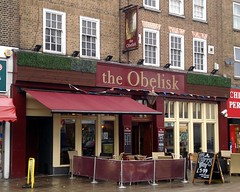 The Mount was a pub in Chingford; according to the April/May 2019 London Drinker it has now closed and its future is uncertain.

It was previously known as the Obelisk (pictured), but according to the Aug/Sep 2017 London Drinker it reopened under the name of the Mount after an extended period of closure. We hadn't visited since it reopened, but our assessment of a previous incarnation can be seen on an older version of this page.