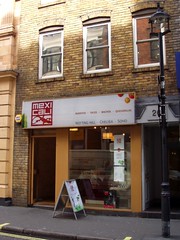 Mexicali was a burrito/taco place in Soho. It closed in January 2011, according to Good For Lunch.