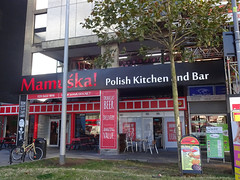 Mamuska! was a canteen-style Polish restaurant in Elephant and Castle. It was forced to close in July 2018 when the landlord declined to renew the lease. They hope to reopen on Leake Street later in the year.

The current premises consist of a relatively large but low-ceilinged room, filled with mismatched tables, some large enough to be communal. Posters on the walls offer phonetic renditions of the Polish names of various dishes. Customers order and pay at the bar at the back in return for a numbered ticket, then collect from a serving station to one side when their ticket number flashes up on a screen in the corner.

Kake visited on a Wednesday lunchtime in November 2017. There were around a dozen other customers when I arrived at 1pm, but still plenty of free tables. Music was playing, not too loud, and a Polish cookery programme was showing on a flatscreen with the sound off. A member of staff greeted me as I was looking at the menu near the doorway, and made sure I knew the ordering procedure.

I ordered from the lunch menu photo, choosing the placki ziemniaczane with pork gulasz (potato pancakes with goulash, £6) photo. The potato pancakes were nicely browned, and sturdy but not stodgy. The gulasz had a decent flavour, and the sauce soaked into the pancakes very well, but the meat itself was somewhat overcooked, having gone beyond tender and started to dry out. The whole thing was also served lukewarm rather than hot. Sauerkraut salad on the side (included in the price) was disappointingly non-sour, but fine aside from that.

Accessibility: Step-free throughout, including to an accessible toilet.